A Change of Seasons: Fundraising in the Summer Heat 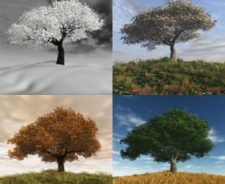 Seasonal giving is a particular challenge for our nonprofit. However, I am not speaking about giving during the holidays, but during the change of seasons, specifically from summer to winter.

As a nonprofit serving the desert communities in the Coachella Valley in California, the change in seasons creates a dramatic shift in our donor base. Donors who live in the coldest area of the county spend the winter here in the desert. The “season” ends in May and many leave before the summer heat arrives.

We receive a significant amount of financial support from our major gifts program during the fall and winter as well as from our direct mail program. During this slower period in the summer we decided to tweak our monthly appeals to specifically reach out to our regular donors who live year round in the Valley.

We decided to mail out appeals asking support for our cooling center, back-to-school shopping for the children living on campus and for our job readiness and job placement assistance services.

We are a transitional housing facility for individuals and families who are homeless. We provide life skills training, basic education classes and other support services. In addition we serve daily lunch meals to individuals and families who live in the area. We also provide emergency services (food and other goods) for the homeless and those who may soon find themselves homeless.

During the summer we operate a cooling center. Still rather new to the organization, I asked what was a cooling center. Living near the coast it was a new concept to me. During the summer months the average daily temperature is about 105 + degrees and in August and September it can reach 115. The cooling center offers our neighbors a break from the heat and the chance to rest in a cool environment and watch movies and participate in other activities. Many who arrive in time for our noon lunch will stay until it closes in the late afternoon.

This was the first time the organization sent out a direct mail appeal to help support the center. The response was exciting and within the first two weeks the mailing paid for itself and then some. More importantly more than 25 percent of the donors who responded had not donated to us in more than a year and in some cases increased their giving.

The following month we sent out a back-to-school mailing to support our school shopping for the children of the families who live in the residential building. The response was just as great as the cooling center. The donations came in a bit slower, so it took about three weeks for it to pay for itself and again more than 25 percent of the donations came from donors who had not given to us for more than a year.

Due to the success of these mailings, our 3-year plan includes similar appeals during the summer months. Combined, these mailing generated a net of $12,000, an increase from the same period last year. This past September we sent out another new mailer and this one focused on our life skills and job search classes. We’ll know the results of that mailing next month.

During this summer of giving, I learned a valuable lesson. An everyday slice of life in your community can be a great opportunity to raise funds for your organization. If you write a compelling story and one that speaks strongly to the reader, people will respond and support your mission.

This season brought us a rare opportunity to launch a comprehensive advertising campaign on television, radio and billboards, which will share the same message across all media. The thirty-second television spots feature testimonials from three of our clients. The clients’ success stories feature one of our several programs that helped them start a new life. The commercials will air on the three local affiliates of the three major networks.

The audio portion of these three commercials will be used for the thirty-second radio commercials scheduled to run on three stations that reach the demographics of our financial and goods donors. Our billboards will feature a client who also appears in the television and radio commercials.

The television commercials will run through to the end of December and the radio ads will end in January. The billboards will be up through early February. We’ve included a way for us to measure the success of each advertisement and we will know which advertising channel generates the best result in the first quarter of next year. Thankfully, we are not in a “major” market so we were able to run this campaign with a modest budget.

This turns out to be a rare opportunity to reach out to our entire community. Residents will either see our commercials on television, hear them on the radio, and on billboards during their commute to work, home or to their next golf game.

Through these off-season cost-effective outreach channels, we have maintained contact with our residential constituencies and also added revenue to our fundraising program.

From: Uncategorized
← Executive Order for Open and Machine Readable Data
18 Great Resources Every Fundraiser Should Know About →
No comments yet